Death and Beyond in Guanajuato, Mexico

So Wednesday morning, July 4, we awoke early and went to breakfast at Casa Ofelia. We appeared to be the first customers of the day. Soon after we sat down, a very small indigenous man in white traditional garb with a guitar on his back came in to pray and bless himself at the little altar of Mary just inside the front door. Then he began to play and sing Besa Me Mucho at us. We were also his first customers of the day. Remembering what my Mexicana friend Tere had told me about the importance of the first customer and its influence on the way the day goes, we gave him a few pesos. The next customers rebuffed him and he left after kissing a few more pictures on the wall.

Our breakfast was quite tasty, and then we were on our way -- to see a museum full of mummified corpses under glass, at least one of which is believed to have been accidentally buried alive.

Guanajuato is famous for its Museo de las Momias where over 100 naturally mummified bodies are on display, many of which were buried during a cholera outbreak in 1833. They were disinterred between 1865 and 1958 when families failed to pay the yearly tax to keep them in the mausoleum (later the law changed and they quit pulling them out). At some point workers started charging a few pesos to see them, and the famous museum was born.

The dry climate and conditions in the mausoleum dried and preserved many bodies before they could decay.  The skin even shows the pores and texture, and much of the hair is there -- some in disturbing places.  Many are still clothed, at least partially.  So many have no clothing, and I wonder if they were just buried naked.

Ignacia Aguilar-Chirilo suffered from catalepsy, which made her heart appear to stop for long periods. During one of these incidents in 1922, her heart appeared to stop for more than the usual time so she was declared dead and her relatives decided to bury her. When her body was disinterred, her arms were over her head instead of simply being crossed over the body. It appears she was biting her arm, and there were wounds on her forehead. Not how you want to wake up and spend your last minutes!

This museum also houses the smallest mummy in the world, along with its unfortunate mother. She was a victim of malnutrition and cholera and died when she was 6 months pregnant.  Her child is one of the most well-preserved mummies, according to the notes.

Some of the babies were lovingly dressed and accessorized for burial.

The broom is for one of the saints, I believe.  The one wearing rubber pants looks like it was a much later burial.

But enough with all the death.  Before we went to the mummy museum, we got waylaid by a tour hawker with a nice private walking tour in English. Our guide, Manuel, has lived all his life in Guanajuato, and is a very young and energetic 71.  He even told us about how he and a couple of his altar boy friends found a secret passage under one of the cathedrals that contained torture devices from the Inquisition and some old paintings that were probably ordered destroyed but were hidden instead.  One is of a pregnant Virgin Mary and now hangs in the foyer of the church.

Manuel said that the priest caught the already spooked boys when they came up from the passage. He told them they must never, ever speak of it or they would go to hell.  He never did, at least until that priest died.

The highlight of Guanajuato for me, both this trip and back in 2008, are the nightly singing tours to the Alley of the Kiss. Students at the University of Guanajuato (estudiantinas) dress like troubadours and sing and play instruments and clown around and give a very entertaining tour.  Since the old part of the city is shaped like a bowl you can hear their wonderful male voices everywhere. The tours start outside the 2nd most beautiful theater in all of Mexico, Teatro Juarez.

There was so much to see and take pictures of, but I think this post is already long enough. To see more, check out the slideshow below, or click on any image to pop on over to the album on Flickr and see the best photos and their descriptions! 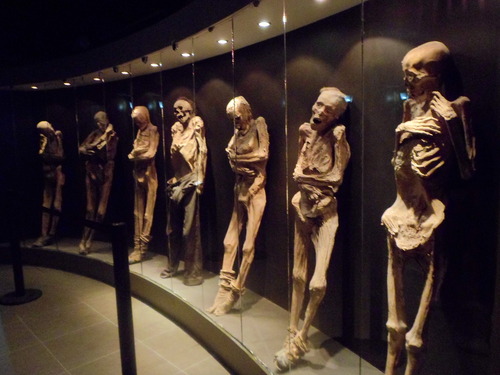