In my previous post I mentioned catching up – well here goes!

We actually arrived at the WMNWR near Lawton, OK on April 27 and stayed for three nights.  This is when we were still in our tent.  No, not the folding tent on wheels, the actual 10×13 WalMart tent that goes on the ground.  We set up camp in the Doris Campground.  Bryn cooked some chicken stew concoction that was delicious!  We made coffee and enjoyed it, and we also took a walk, saw some deer and bison. 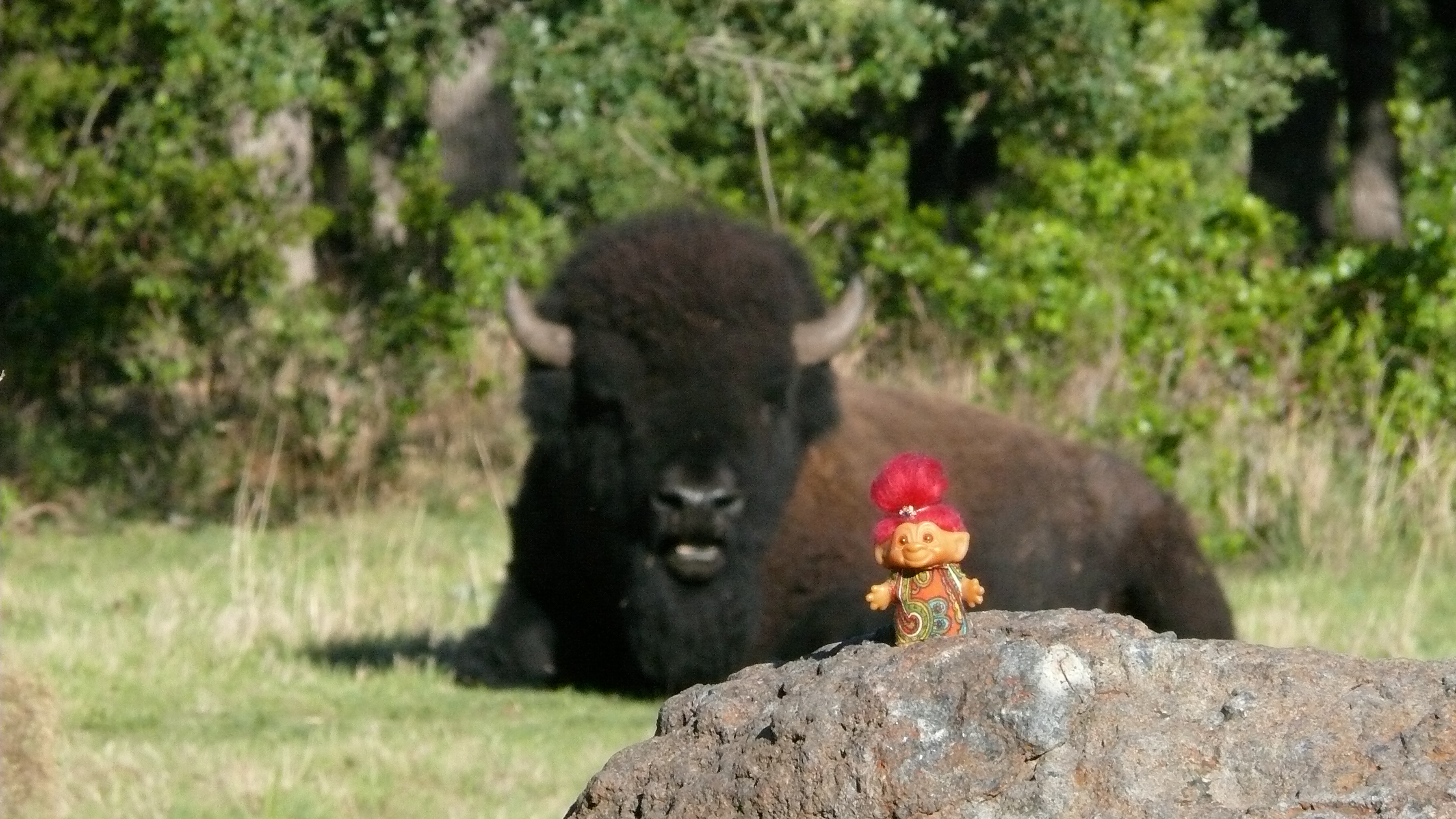 We weren’t exactly right next to the group camping area, but it doesn’t matter when a few dozen little monsters set up for the evening.  I’m not sure if it was a school or church group, but it seems like they were given explicit instructions at around 9:00pm.  ”Kids, make as much noise as you can for the next hour:  Go!”  Good grief.  Yelling, screaming, running around.  At one point I talked to one of the adults who was passing by and I asked him how long they were staying.  He said “Oh, just one night.  That’s about all I can take!”  Eventually they managed to quiet down long enough for us to get to sleep.

One problem we ran into here was communications.  For example, updating our blog, or Facebook page.  Kinda hard to do when there were zero bars for either AT&T or Verizon.  I did manage to get one small update in by driving to the small parking area on the hill just outside the gate and holding my laptop up in the air out the car window.  Ridiculous! 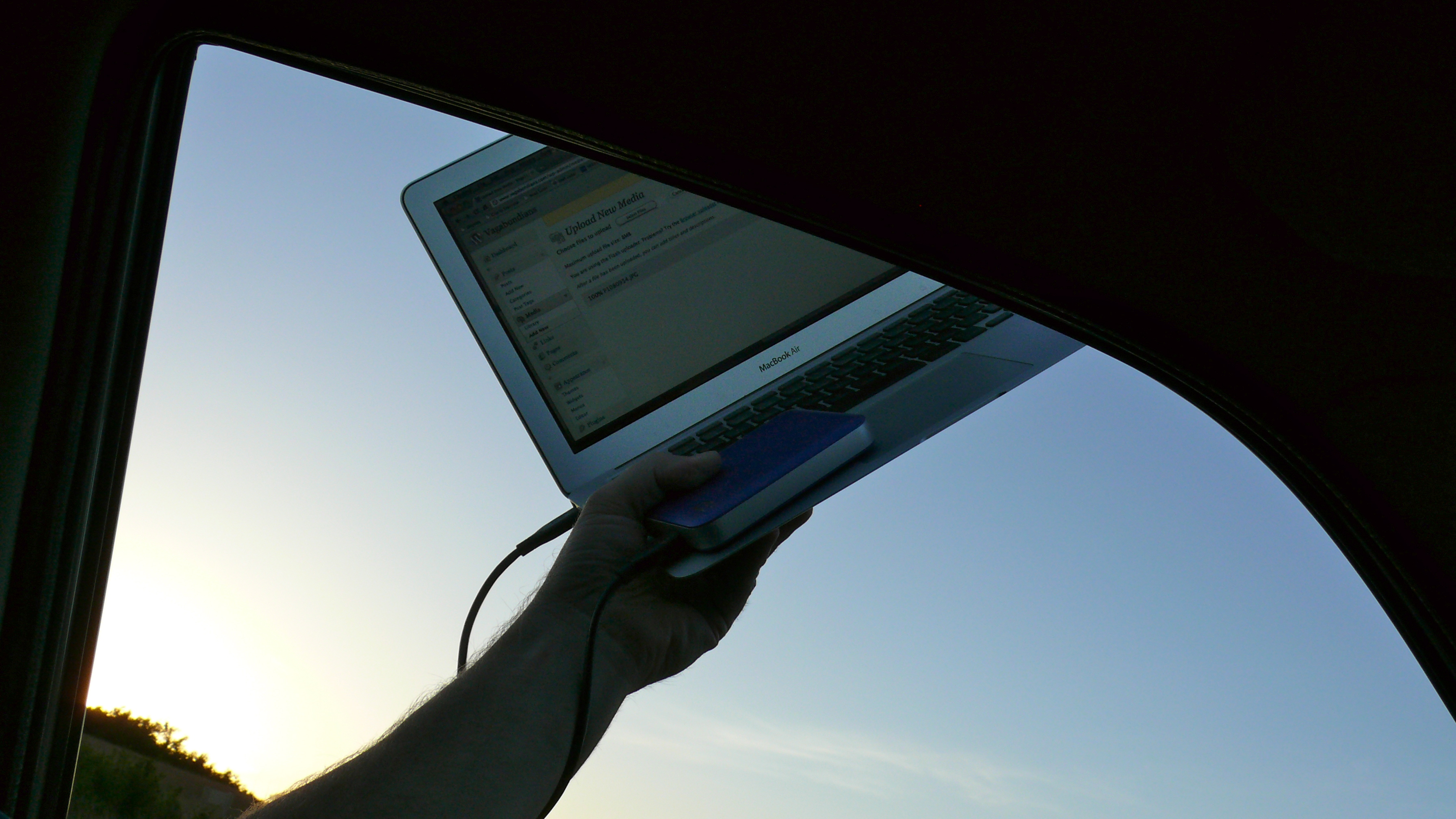 Saturday we did some birding and exploring.  We walked around the park, then over a small bridge which crosses an inlet to Quanah Parker Lake.  We followed the trail around the north edge.  Saw some nice birds and turtles.  Met another couple out birding as well.  The trail leads past a few areas where they hold educational demonstrations on the weekend.  Lots of little monsters got to learn about fire safety and rattlesnakes and such.  I stopped to get some shots of the rattlers with my zoom lens.  Now if only we could see some of these babies in the wild! 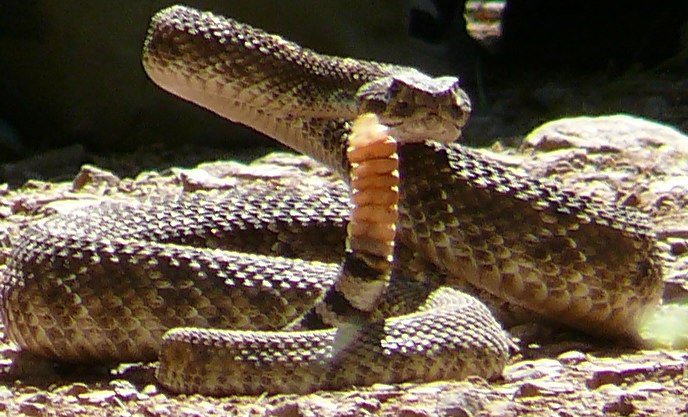 Sunday we awoke to a small family of Turkeys wandering through the campground, occasionally gobbling at each other.  We drove out and stopped to watch the prairie dogs a bit, then we climbed Elk Mountain.  Nice little hike, not too strenuous, and our first summit there.  We’ve been to this NWR many times when we were rock climbing and yet never went up this mountain before (at least not all the way up).  While we were on top, we met a father/son hiking team.  They mentioned that they had been looking for a natural arch.  A what?  He showed me a guide book which mentioned it and even included pictures.  So Bryn and I explored the top and northwestern edges of this mountain.  We were off of any trails.  We never found it.  But I was feeling rather adventurous, at least until we saw a group of kids scrambling all over parts of the mountain top that were even more remote than where we were.  Kids.  Oh well. 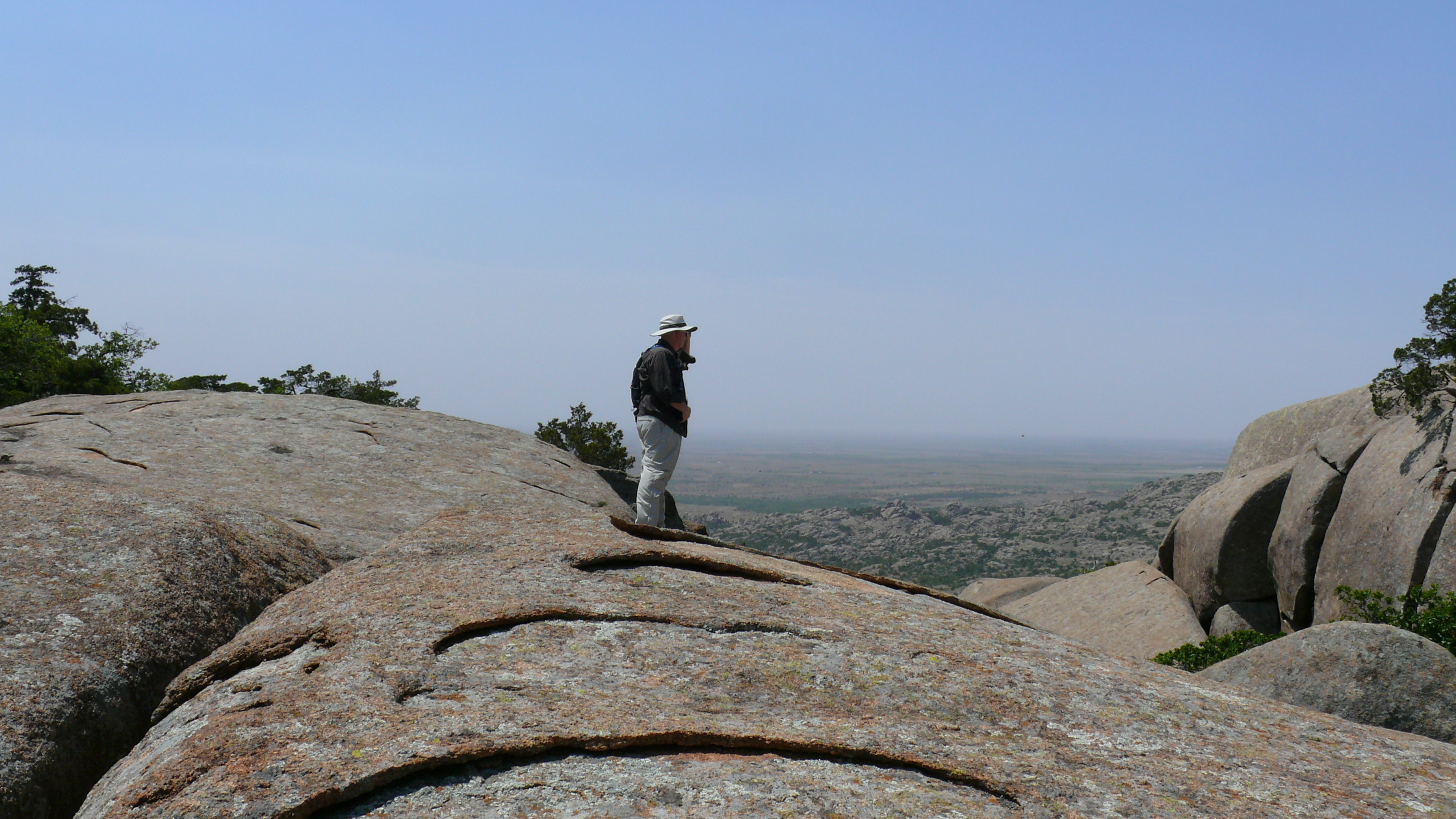 Before the day was done we also drove around to the south side of Quanah Parker Lake.  The dam was very old, tall and narrow.  According to the plaque it was built as part of the CCC project back in 1935!  We also watched some Mississippi Kites soaring over the lake for awhile. 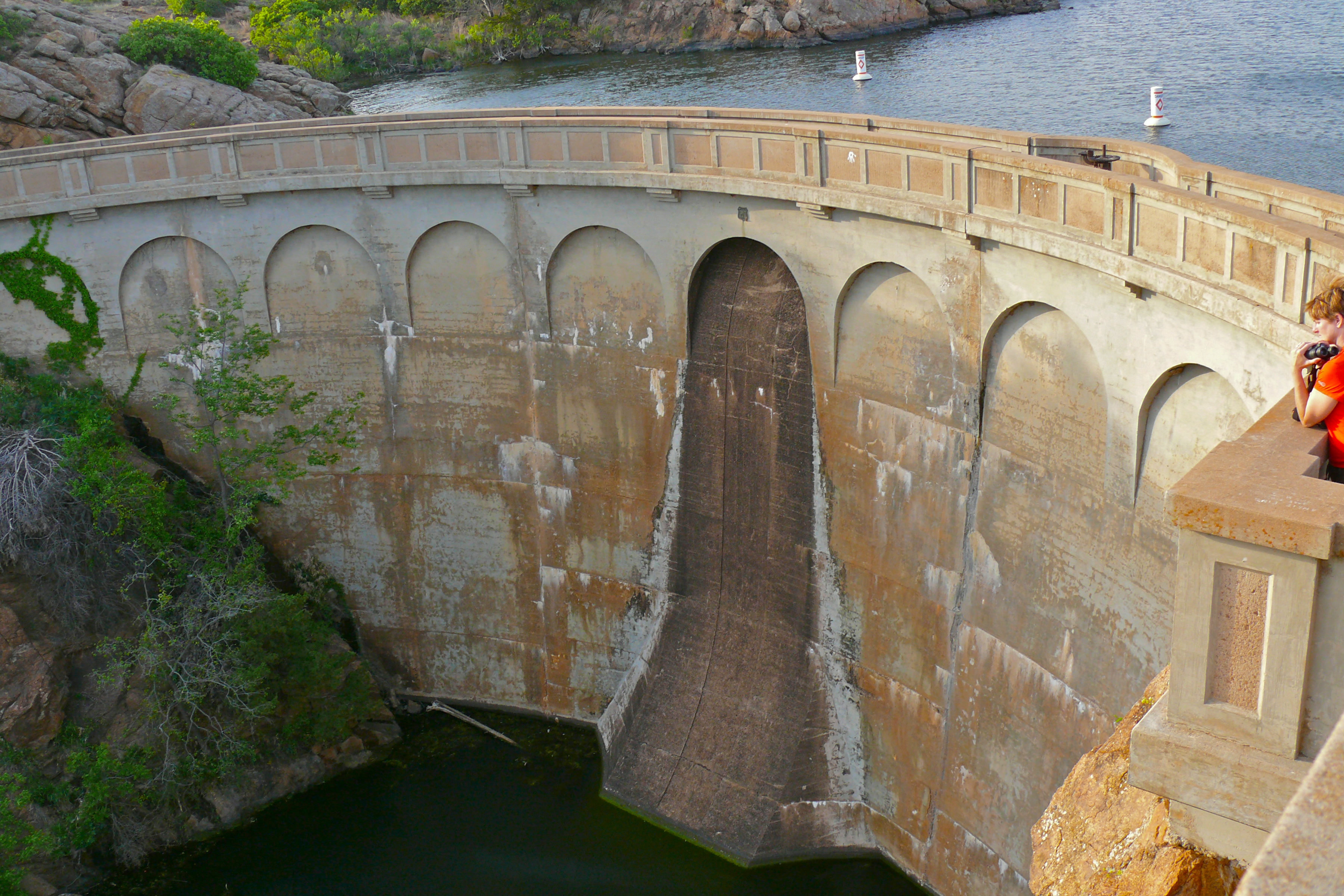 Monday we hiked out to the 40-foot hole area.  I have fond memories of rock climbing here.  The river bed is all rock on both sides, and even under the water.  The water has carved paths and pools here.  We hiked in from a different side than I had taken before and passed the Lost Lake Dam.  A plaque on the far side states that it was built in 1926 and was “Lawton’s Contribution to the Playground of the Southwest.”  On the spillway side you can see that it is a sloping pile of rocks grouted together.  Really old-school!

We enjoyed puttering around and saw no other people while we were there, always a bonus.  Got some nice shots of Canada Geese in flight as well.  On the way back in, we stopped at the entrance to the Narrows, one of our all-time favorite climbing areas.  There is a really old cabin there, built by the Lawrence family in 1912.  We also saw some kids free-climbing some routes.  I’m glad we left before someone got hurt and had to call in a rescue.  On the drive back to the campground we saw a baby bison, very cute! 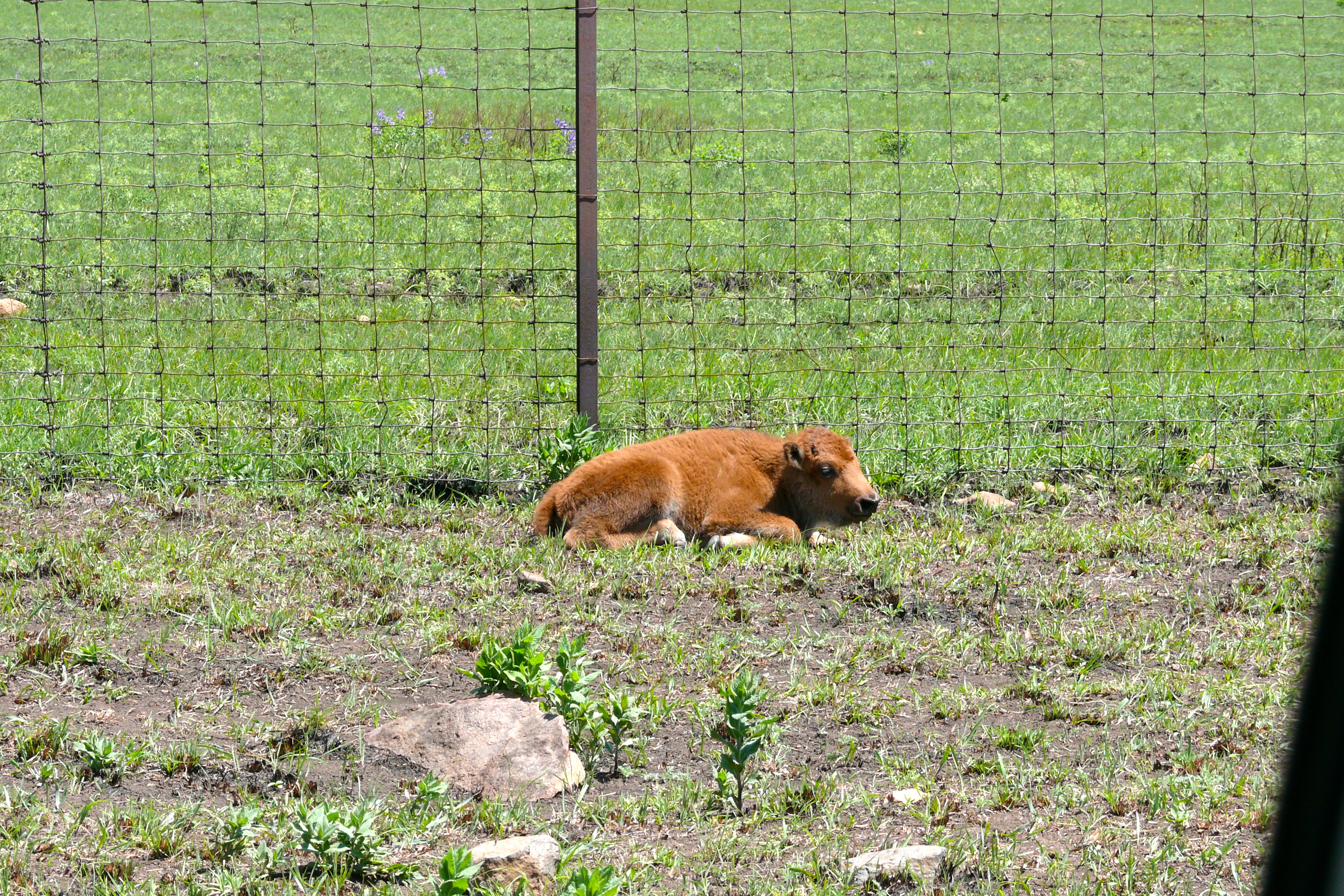 I had been keeping an eye on the forecast and it looked like a good chance for midnight thunderstorms, so we broke camp and drove on to Amarillo.  I tried to take video of Bryn nodding off in the car.  So cute!  We also saw a big woman with a hammer in her front pants pocket at a convenience store.  If she was in the big city, she would have been hanging out at WalMart, guaranteed. 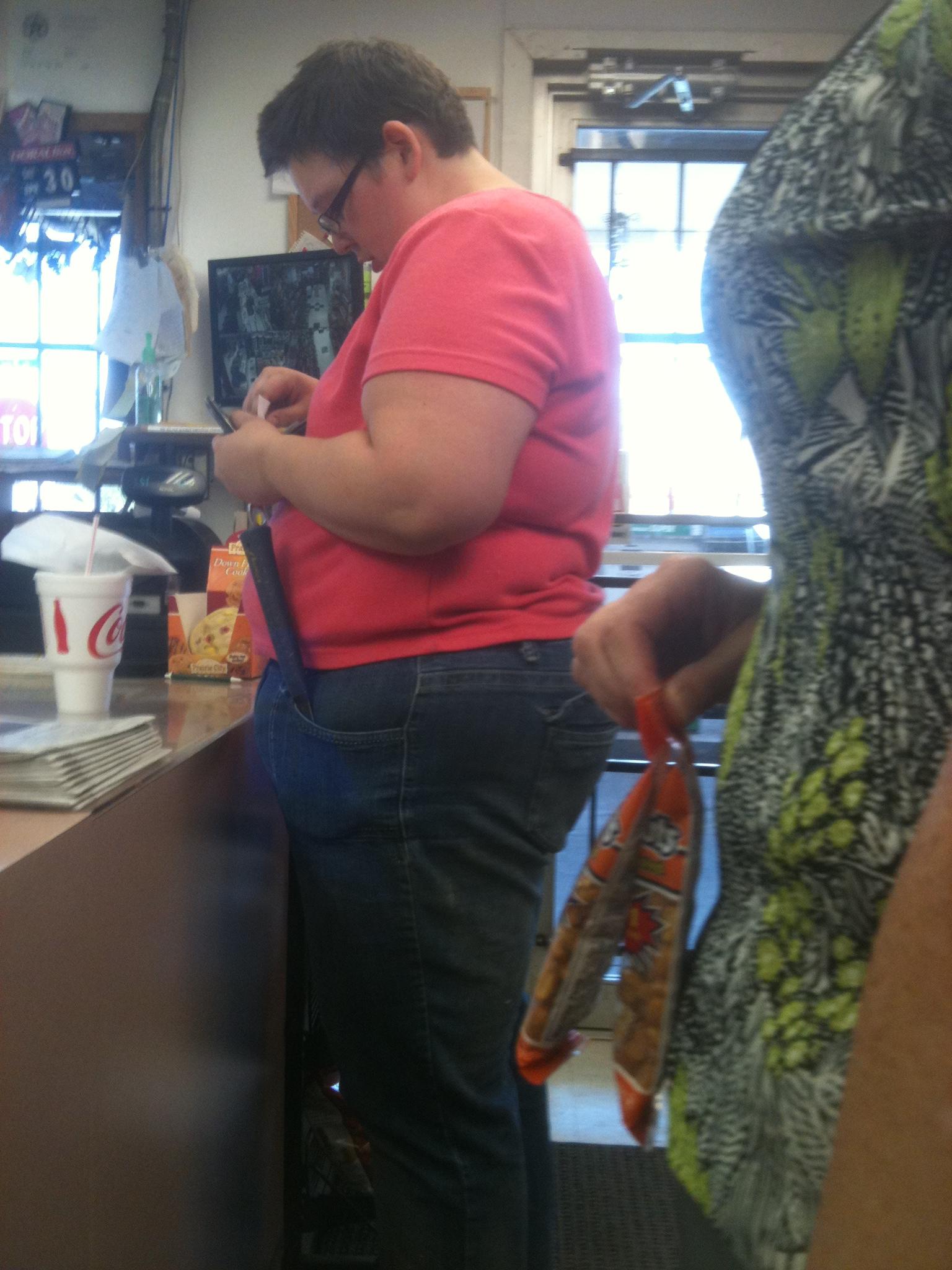 Here’s the whole album of photos…

One thing that I really like about other travel blogs that I read is when they write about where they are right now, not about some place they visited years ago. We’ve been trying to do that, but the tricky part is that we have been seeing so many places and taking so many pictures that it is difficult to keep up! As a matter of fact, I (Glenn) am flat out behind. ...

Wow. If you come to Albuquerque, one thing not to be missed is Ross and Carla Ward’s Tinkertown Museum. Fabulous collection of the whimsical and historical along with Ross’ skillfully and lovingly carved Old West figures in their tiny town dioramas. My favorite part was the full miniature circus, complete with authentic carney banners – authentic because the artist himself was a real circus banner painter – and original photos from the old circus and carney days. ...